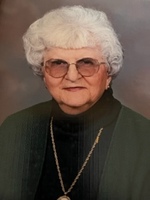 Elizabeth Glanz (nee DiNenno) passed away on April 18th at the age of 98.  A longtime native of Storrs, she worked for many years at University of Conneticut, most recently

in the School of Fine Arts.

She is survived by her sister, Anne (N.Windham), her three children, Roberta (Petersburg, NY), Robert (Fulton, NY) and Thomas (Locust, NC), her 7 grandchildren, and 13 great-grandchildren. Elizabeth "Liz" was preceded in death by her husband, Robert Edward, sisters Josephine and Rose, brother William and grandson Christopher.

Memorial mass at St. Thomas Aquinas church in Storrs is planned (date to be announced). She is to be buried with her husband at Arlington National Cemetery.