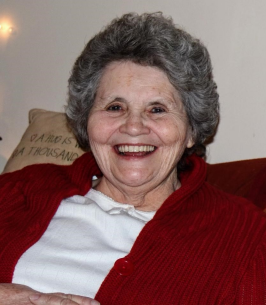 Joan graduated from St. Mary’s Academy and continued her education at Samaritan School of Nursing where she graduated as a registered nurse. Her work gave her the opportunity to care for patients in both Florida and then New York City before returning to her hometown of Hoosick Falls. Her nursing career started with her working on the floor but then transitioned to the nursery, a place she especially enjoyed. After retirement, she continued helping others as a social worker in Rensselaer County where she worked for over 20 years. Her career speaks to who she was; a caregiver to all.

Joanie’s greatest love was her family. Her survivors include her children, Margaret (Ken) Stevens and Tom DeRosa, as well as her siblings, James (Anne) Keegan and Mary (John) Schmigel. She also leaves behind two of the greatest loves of her life, her grandchildren Chelsea (Brett) Stevens and Andrew Stevens. In addition, Joan had several nieces and nephews including Brian (Lauren) Keegan, Sean (Lee Ann) Keegan, Colleen (Todd) Burdick, Michael (Kaila) Schmigel, along with a handful of great-nieces and great-nephews, and her pal Mowgli, all who she extended her ‘Nan love’ to.

Joan was her family’s eagle, the wind beneath their wings. If you knew Joanie, you were one of the lucky ones to know ‘it’s a small world after all.’